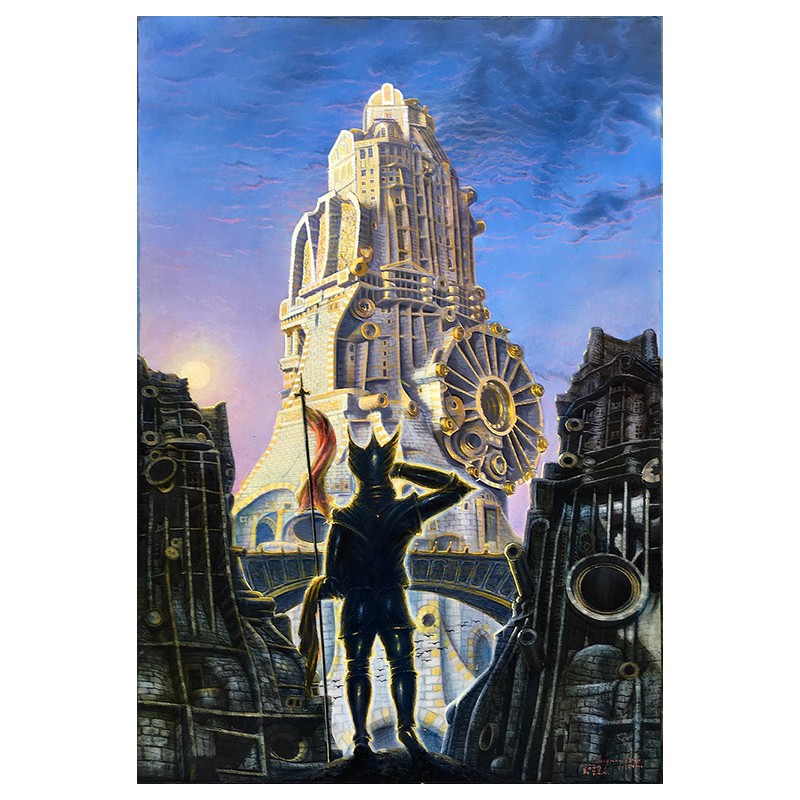 Angerer der Ältere is one of the most versatile artists of this century.

When it comes to fantastic movie world in the USA, the route does not lead throw Lower Bavaria. Angerer der Ältere was able not only to get hold of the Bavarian Film Prize with his creative conceptual ideas for "The Neverending Story II" (Production Warner Bros.), but also thrilled millions of audiences. His fantastic paintings sell worldwide.

In July 2004, France celebrated the "100th Birthday Salvador Dali"-Angerer der Ältere represented with his high-level art with his artworks and designed the poster Hommage à Dali.

Whether it's luminaire design (Angerer's six-meter high chandelier, the 113 ostrich-egg-chandelier) or other works, his clients include not only private collectors and art appreciators, but also the news magazine 'Der Spiegel' (Covertitel), he created an original Audi Gear a fantastic castle, the gear-castle. For the company Wolf Klimatechnik technology and art emerged with fantastic transformations and thus a new school of seeing.

Also Pope Benedict XVI em. did not hesitate to praise a self proclaimed "ERLÖSERKAPELLE", designed by Angerer der Ältere, as a "finally real sacred art" with a personal greeting. A work of art that inspires Italian and German dignitaries alike, as well as the Metropolitan (now patriarch in Romania), who commissioned it to become an icon; a great tribute to a Catholic Christian.

His art and products effortlessly jump back and forth between a world of crazy fantasy and the world premiere of "The Little Hobbit" JRR Tolkien. Angerer der Ältere was responsible for stage design (scenography and costumes). Angerer the Elder also created the unique tomb for Michael Ende as a large bronze book with relief-like mythical creatures on which children were seen playing. Something Michael Ende, one of the most successful and recognized writers of our century, would have wished for. In particular, Japan paid homage to the artwork in numerous magazines.